NJBIZ Names NYI “Emerging Business of the Year” for 2012

NJBIZ has named NYI “Emerging Business of the Year” for 2012. The announcement was made recently at a special awards gala at The Palace at Somerset Park, attended by 300 New Jersey business leaders and NJBIZ staff and sponsored by EisnerAmper, Sun National Bank, K&L Gates, Cigna, Caliper.

NYI, a specialty provider of colocation, dedicated servers, enterprise Cloud and other business-critical infrastructure solutions, was selected, according to an editorial statement from NJBIZ, due to the “leadership, innovation and growth” NYI has displayed in the New Jersey market. 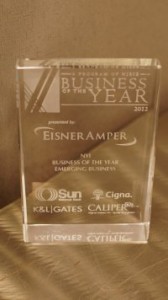 “This is a fantastic honor,” said Phillip Koblence, VP Operations, NYI. “NYI Bridgewater only opened a few short years ago. To be named among the Garden State’s most dynamic businesses is an important milestone for NYI and a tribute to New Jersey’s support for emerging businesses.”

In a profile in the accompanying 2012 Business of the Year Awards supplement, NJBIZ  praised NYI for maintaining strong growth, while preserving “the flexibility of a small company that can adapt quickly.” NJBIZ also praised NYI for selecting the Garden State as an expansion target in 2009 with the opening of NYI Bridgewater, a 40,000 square foot datacenter facility.