Alan Turing, mathematician, code-breaker, and computer scientist would have celebrated his 100th birthday on the 23rd June. Turing is in large part responsible for the world we live in today, and we at NYI are certainly aware of how Turing developed ideas and technologies that make our business possible.

Turing is most famous among the general population for his eponymous test for artificial intelligence, which has long captured the imagination of the media and technology communities. The Turing test plays a practical role in security today: the CAPTCHA tests that are used to distinguish humans on the web from bots and scripts are a form of reverse Turing Test.

But his lasting legacy will be his work in computer science, a field of which he is considered by many to be the founder.  With the invention of the Turing Machine, he laid the groundwork for understanding the mathematics of computation. Turing proved that a Turing Machine is capable of simulating the logic of any possible algorithm. Using the framework of the Universal Turing Machine, computer scientists were able to formally conceptualize and develop algorithms. Turing himself developed an early chess-playing algorithm which he ran by making manual calculations to simulate a computer.

During the Second World War, Turing played a crucial part in breaking Nazi codes, including the infamous Enigma Machine. The papers Turing wrote during this period, on statistical cryptography, were considered so important that they were only released earlier this year as part of the celebrations of his centenary. The breaking of the German codes provided vital intelligence to the allies and played a decisive role in the outcome of the war. 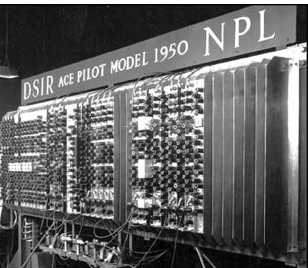 After the War, Turing developed the first detailed designs a stored-program computer, the ACE  (Automatic Computing Engine), which was hugely influential on later computers, including the Bendix G-15, which was a used in industrial and scientific data centers until the mid-60s. Later, Turing worked on developing software for early computers such as the Manchester Mark 1, which was based in part on his and John Von Neumann’s ideas.

Unfortunately, as a gay man in 1950s Britain, Turing was subject to the same laws banning homosexuality that had earlier sent Oscar Wilde to prison. When Turing was revealed to have been involved in a relationship with a man, he was charged with gross indecency, and given the choice of hormone injections or prison. He chose the injections. On 8 June 1954, Turing comitted suicide, probably by eating an apple poisoned with cyanide.

If you’re interested in celebrating the life of Alan Turing, Consciousness and Computation are hosting a free event in New York on 23rd June, which will feature live music from philosophers and cognitive scientists, and there are many other events happening around the world throughout 2012.