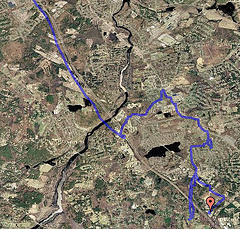 Apple has, in recent days, feasted on humble pie; even going so far as to issue an apology for the poor quality of their recently released mapping app when compared to its competitors. There are various factors that have contributed to the less than stellar launch, but prominent among them is the problem of data integration.

Mapping for mobile devices is an incredibly complex problem to solve and requires aggregating and integrating data from numerous sources. In addition to the basic mapping data, which is challenging in itself, Apple have to pull in data from satellite imagery, 3D modelling, location services like Yelp and and TripAdvisor, addressing data, and so on.

While this information is all available for licensing, each component will be delivered in a slightly or even significantly different format, which makes integrating it a non-trivial problem. Each location in each of the data-sets has to line up exactly, or the app will produce the sort of misleading results we’ve seen over the last week from Apple’s maps. Imagine a many layered puzzle where the goal is to line up millions of holes perfectly across all the layers when many of the holes are are in a different position than they should be.

This is a problem of both data formatting and of data silos. Companies are naturally going to collate their data in whatever form suits their needs, but there’s no reason that they should not expose well-defined and standard APIs. The lack of open APIs in this space imposes a considerable hindrance on those who seek to create value.

Companies like Google are expert at solving this sort of problem; integrating data from disparate sources is their bread and butter, but Apple, in spite of having thrown huge amounts of money at the problem, including buying several mapping companies, has come undone, in part, because the data is so difficult to integrate into a cohesive whole.

If a company the size of Apple cannot successfully overcome these obstacles (at least in the short term), then what hope is their for small companies who seek to innovate and offer novel solutions in the mapping space. Value remains unreachable so long as data integration requires the investment of billions of dollars. Open APIs that expose data in a standard, well-defined formats will bring the process of creating maps within the ambit of those who will innovate and create new value.